一般社団法人PCA おもいやりのちから English,太地町ミンククジラ事件 Murder of Minke Whale in Taiji: Open Letter to the Governor of Wakayama

Murder of Minke Whale in Taiji: Open Letter to the Governor of Wakayama 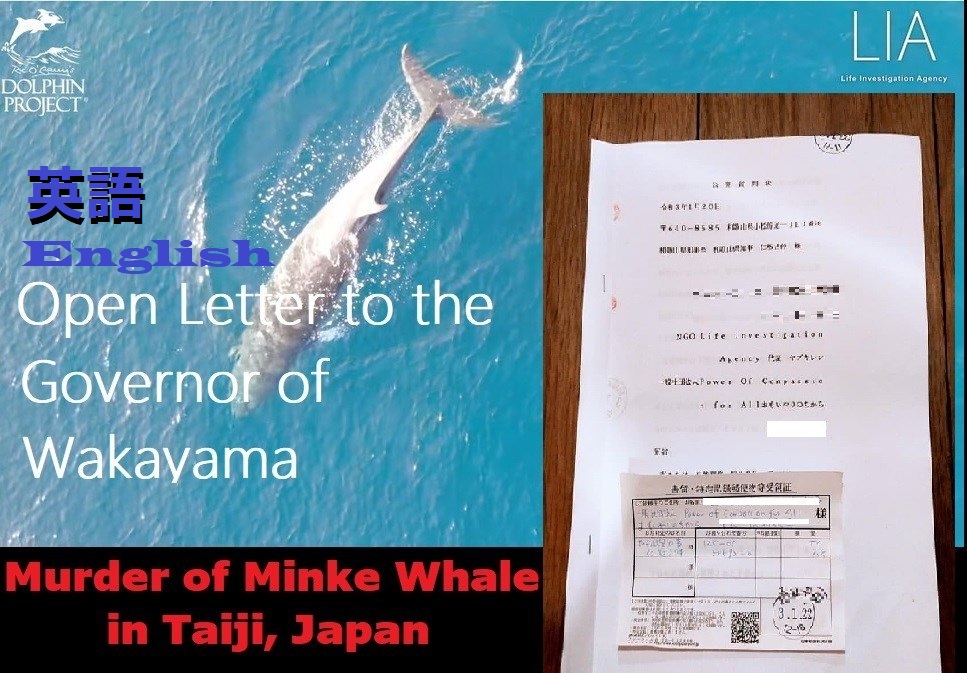 The following is an open letter to Yoshinobu Nisaka, the Governor of Wakayama Prefecture, jointly published by: 1.) LIA (Life Investigation Agency), which is engaged in whistle-blowing, criminal investigations, and educational activities related to the natural environment, wild animals, companion animals, etc.; and 2.) PCA (Power of Compassion for All / Omoiyari no Chikara), which translates and disseminates animal-related information around the world. We are requesting a response from him by February 3, 2021.

Questions included in the letter:

After a young minke whale became trapped as bycatch inside of fixed nets off the coast of Taiji for 19 days, starting in December 2020, fishermen tied a rope around its tail fin and suffocated it on January 11, 2021. Please answer the following questions specifically and simply.

If it was possible to tie the minke whale’s tail fin and connect it to the boat:

➀ Wasn’t it possible to pull the whale to the entrance of the fishing net and release it into the wild instead of killing it?

② Wasn’t it possible to move the boat connected to the whale and release it outside the net?

On November 29, 2020, a humpback whale became trapped as bycatch in the same fixed net as the one that the minke whale was trapped in on December 24, 2020. At that time, the fishermen lifted the net and released it into the wild the next day. So this time, why did the fishermen kill the young minke whale and sell its meat for commercial sale in local markets?

As the Wakayama governor, you gave the following statement as the reason why you / the fishermen of Taiji did not rescue the life of the minke whale: “We attempted and made an effort to let the whale swim freely into the wild, but strong tide currents made it impossible; by boat, we couldn’t get close to the fixed nets where the minke whale was trapped”.

-Even after December 24, 2020, no effort was made to release the whale into the wild, even when the weather was calm, and the fishing boats’ operations were carried out as usual. The fixed net fishermen were also operating normally on those days. The only dates when fishing with fixed nets was not performed were: 1.) during the New Year’s holidays from December 30, 2020 to January 3rd, 2021; and 2.) when the weather was bad, which was December 28th, and January 6th, 7th, and 8th. Nevertheless, it was only on December 24, 2020 that the fishermen actually tried to release the whale. Moreover, the time they spent trying to release the whale on that day was only about 10 minutes.

In addition, Governor, you say that you did not release the minke whale because “instead of getting out of the net by itself, the minke whale moved into the very last net in the multi-layered series of nets, so it became more and more difficult to get it out.”

In other words, Governor Nisaka, it is difficult to understand your explanation that “We tried to release the minke whale, but we couldn’t,” considering the number of days on which the Taiji fishermen were able to take out fishing boats and drive dolphins as usual. We are not convinced by your explanation. Please explain this situation in a straightforward manner, and in concrete terms.

The fishermen used a suffocation method to kill the minke whale, in which they tied a rope around its tail fin and forced its head beneath the water, where it took around 20 minutes to die. This was a brutal method that garnered harsh criticism from prominent international experts, British Prime Minister Boris Johnson, the Australian government, etc.

Please answer the following questions simply, and in concrete terms:

➀ What other slaughter methods did you have at your disposal?

② If you had other options (methods), why didn’t you use one of them?

③ If you do not have any other slaughter methods, please explain the reason.

④ Regarding your answer to ③, is there enough evidence to convince experts of your reason?

Please answer the following questions simply and concretely, regarding the fishery damage caused by lifting (removing) the set net to release the whale:

➀ How much is the estimate for the total damage?

② Why didn’t you make a budget to remedy the damage?

The ocean in Taiji where dolphins/whales are being hunted includes the coastal area, which is designated as a quasi-national park. In our opinion, Taiji and Wakayama Prefecture should launch a business other than whale/dolphin hunts, to remove the area’s global stigma and recover its honor. Please explain your thoughts, Governor, on any plans to abolish dolphin/whale drive hunting and replace it with tourism – such as dolphin/whale watching, nature tours, and hiking – as the town’s main business.

Just before the Tokyo Olympics is scheduled to be held, it is clear that Japan is receiving more attention than usual from overseas, due to the fact that a young minke whale was brutally slaughtered and its meat sold in stores, and more generally due to the notorious Taiji dolphin drive hunts. It is our opinion that Wakayama Prefecture is certainly corrupting the image of Japan around the world. Please explain your views on this situation briefly and concretely, Governer.

We will not respond to the open letter you sent us on January 20, 2021, as we are advising related parties, “take appropriate measures based on relevant laws and regulations.” 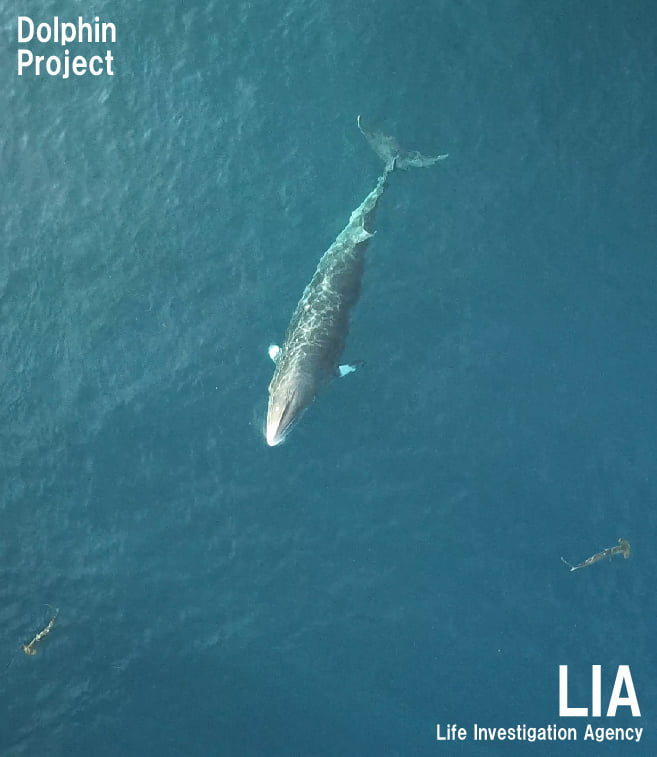